My friend, Kathi, came to dinner recently and brought this delicious dessert. I think I have made it at least once a week since then. But I made up my own version using fat-free cool whip and fat-free, sugar-free instant cheesecake pudding.  I also use skim milk with the pudding; I tried almond milk but that doesn’t work–trust me! 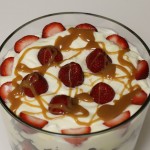 I didn’t have a trifle bowl, so I bought one at Wal-Mart for $6.97. Or you can buy the Pampered Chef Trifle Bowl for $41 like my friend, Kathi, has.

You love your website, and well you should. You put a great deal of thought into the overall design and usability, and you put your heart and soul into the content you publish. But do you give any thought to maintenance and protection issues? No matter how big or small your site and your business are, they may be at risk. There is no time like the present to take action.

This is just an example text widget. You can add any kind of widget in here.